Once there was a tree.  It was tall and magnificent, with branches that stretched to the sky.  Although it was larger than most trees, it seemed to do everything else like a normal tree.  It lost its leaves in winter, it grew them in summer.  It drank up the rain and grew a little taller each year.

But despite appearances, this was not a normal tree.  It was a tree with one magical secret.  And a young woman named Madeline was about to find this out. 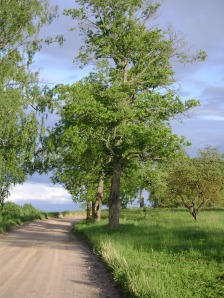 Madeline’s family were The Bakers, and that is exactly what they did. Mr. Baker, Mrs. Baker, Madeline, and her 3 brothers and 2 sisters all helped in the family bakery each day. Madeline’s family was loud, and funny, and loving, but the work was hard and the house was crowded. Sometimes, Madeline wished that her life was different.

The tree grew on the outside of Madeline’s village and didn’t receive many visitors.  One day, instead of eating lunch with her family at the big oak table in the back of their bakery, Madeline decided to make herself a picnic and walk to the edge of the woods. She looked forward to quietly nibbling her strawberry scone and sipping her cup of fresh cream without her brothers teasing her or her mother reminding her to sit up straight. More than anything, she wanted to be alone, if only for a few minutes.

Of course, what Madeline didn’t know was that all the tree wanted was to not be alone, if only for a few minutes.

Madeline sat down in the shade of the tree’s strong branches and ate her picnic, after which she felt very tired.  Before she realized it, she drifted off to sleep. She dreamed of having her own house by the little stream that ran around the edge of her village, where she could do whatever she wanted all day long.

When Madeline awoke, she was no longer under the tree with her picnic lunch.  She was in bed in an unfamiliar little house. She could hear a stream burbling through the window. What had happened? Scared and confused, she ran back to her family’s bakery, but when she arrived her parents looked surprised to see her.

“Madeline,” her father said, smiling under his curly mustache. “What are you doing here? Shouldn’t you be resting in your cabin by the stream?” And then Madeline realized what was going on: Her dream had come true!

Madeline considered how this could be possible.  The last normal thing she remembered was falling asleep after her picnic beneath the great tree.  Where had the magic come from?

The next afternoon, she made herself the same picnic lunch. It was a little harder to do on her own, since her sisters weren’t there to help pick the strawberries and her mother wasn’t there to help mix the batter, but Madeline eventually had her picnic packed. She ate it out in the open field by her new house, with the sun streaming down like a waterfall of light. And just like the day before, she fell asleep.

That afternoon, Madeline dreamed that she could fly. In her dream, she whirred over the treetops, her hands lightly brushing the cotton-candy clouds as she passed by.

When Madeline awoke, she hoped her dream would come true again. Standing on a tree stump, she jumped into the air, thinking of the wonderful places she would fly to. But, as you may have already guessed, Madeline didn’t fly. Instead, she landed on her stomach, a puff of air escaping from her in one big “Uff”. No, she thought, it wasn’t her lunch that was magical.

That evening, instead of sleeping in her new bed in her new house that she had all to herself, she decided to sleep underneath the tree. She didn’t mind sleeping outside; her house had been too quiet last night, anyway. Madeline was used to falling asleep to the sounds of her sisters breathing in the beds next to her, and she missed the evening whispers of her parents’ voices as they talked about their day in the bakery’s kitchen. At least outside, she would have the soft murmur of the forest to listen to.

And although she didn’t know it, the tree was very excited to see her again.

The next morning, Madeline awoke, not under the tree, but in her new home by the little stream. Focusing her eyes, she tried to remember what she had dreamed. And then she saw them. Hundreds of books lined the walls of her cabin, all different shapes, colors, and sizes. Now, when she felt lonely in her quiet little house, she could read a story to herself. Her dream had come true—it was the tree that was magical!

Madeline knew she shouldn’t keep this magical tree to herself. Everyone deserves to have their dreams come true, she thought. She ran to the center of her village to tell everyone about the magical tree.

The news spread quickly. As more and more people slept under the tree and then had their dreams come true, even the villagers who didn’t at first believe in magic could be seen carrying blankets and pillows with them as they walked to the edge of town.

Many people had beautiful dreams of marrying who they thought were their true loves, living in great castles, or simply just eating a delicious chocolate-cream pie.  And each of these dreams came true as they awoke in the morning.  Some found themselves married.  Others found themselves in fancy homes.  And one man found himself seated in front of his favorite pie, which was all for him to enjoy!

But, as anyone can tell you, not all dreams are good dreams.  And indeed, some villagers dreamed of odd and strange worlds.  One young boy dreamed he lived under the ocean in a little house of coral, where he swam daily with sharks.  When he awoke, he was in the ocean in his coral home, with sharks swarming and no way to breathe.  He rushed to the surface and barely escaped a shark’s bite.

Another little girl dreamed that she had hands as big as a house, and that her hands could carry anyone anywhere.  When she awoke, her hands were certainly large, but the rest of her body was still tiny.  With such large hands, she couldn’t even lift her arms.  Her mother and father needed to dress and feed her, as though she were a baby again.

And finally, there were those in the village who had nightmares.  They dreamed of their loved ones dying.  Or of their children falling sick.  And when they awoke, these dreams were true too.  Husbands buried their wives, and parents wept over their feverish children.

As all of this happened, Madeline sat in her quiet little house with her books and her silence, missing more and more each day how her life had once been and thinking how she had been wrong.

And so it happened that one day the village decided this tree was not magical, but evil.  Men and women returned home to get their axes, only to start chopping at the tree.  Huge gouges were carved into its bark, and some swore they heard the tree weeping with each stroke of the axe.  When Madeline heard through her window the sound of the axes and the angry cries of the people, she knew what they were doing was wrong.

Standing in front of the entire village once again, Madeline hoped this time her words would help instead of hurt.

“This tree isn’t evil,” she said.  “We’re the ones who are wrong. Each of us had healthy and happy lives.  But still, we wanted more.  All the tree did was try to give us what it thought we wanted.”

The people stopped, axes in hand. It was true.  They had not appreciated their lives before, and it was only now with their old lives gone that they realized how sweet their lives had already been.

That night, the villagers gathered once more under the tree with their pillows and blankets.  They all hoped that they would dream of their past lives and that everything would return to normal.  Drifting off to sleep, each was filled with hope.  Even those who had married their loves or found themselves rich and powerful knew that they must give up their dream lives to have something real again.

When they awoke on this second day, though, nothing had changed.  None of their dreams had come true.  Nothing had corrected itself.

Then the leaves on the tree started to fall from its strong branches, and they continued to fall until, that evening, the tree was entirely bare.

The tree was dying.  And not from disease or drought, but from a sickness that couldn’t be seen.  All the tree had ever wished for was to use its magic to help others.  To grant them their dreams.  And now, it grieved over the pain it had caused and over the anger the villagers felt.

The villagers tried to help the tree.  They watered it.  They bandaged the deep gouges in its side.  They sang to it and petted its once-lovely bark.  But nothing could move the tree from its sadness.

Finally, Madeline visited the tree.  She knelt underneath its once great boughs and thought about her first picnic there so long ago.  All of this sadness began with her first dream and her belief that all she had was not enough.  And at this realization, she started to cry. Her tears fell down her cheeks and chin, and then into the soil at the base of the tree.  She missed her family. She missed the noise, and crowded spaces, and even the chores. She missed her old life.

As she turned to walk away to her silent home by the stream, she noticed a new green leaf on one branch of the tree.  And quickly, over the next few minutes, more and more leaves pushed themselves out onto the tree’s limbs.  The gouges in the trunk healed themselves. Before her eyes, the tree grew strong again.

That night, Madeline slept under the tree for one last time.  She dreamt that her life and the lives of everyone in the village had never been touched by the magic of this tree.  When she awoke, she was in her room above the bakery, with her sisters sleeping nearby.  She was healthy and happy. She was loved.

Looking out her window, she saw the other villagers going about their daily tasks again.  Those who were dead were now alive.  Those who lived in castles now were returned to their humbler homes.  And life was as it should be.

After that day, the tree continued to receive many visitors. They came to admire its beautiful leaves and strong branches, or to enjoy its shade on warm days. But, when it came time to dream, Madeline and the rest of the village preferred to sleep under their own roofs, next to the people they loved.